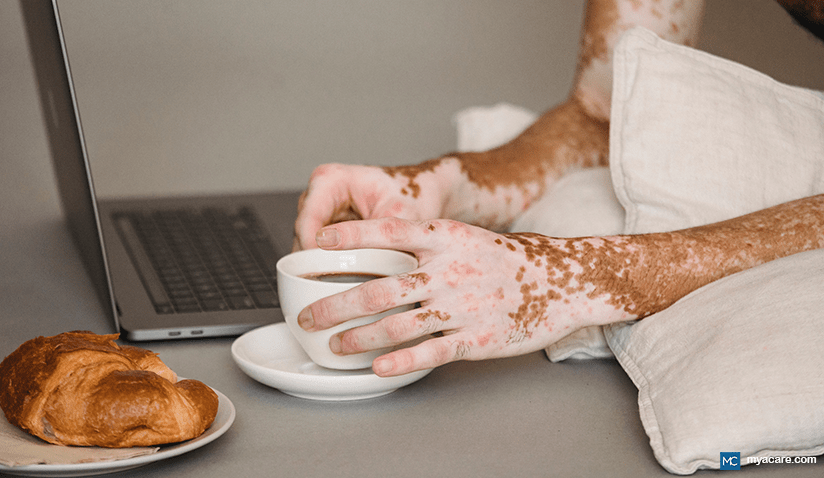 Vitiligo is a medical condition in which white skin discoloration appears on different parts of the body. It affects one in every one hundred people worldwide and is therefore not a rare condition. Vitiligo happens when Melanocytes, the cells responsible for skin color, stop producing skin pigment, also called melanin.

The white patches of Vitiligo can appear on any part of your body, and they may cover any amount of skin surface area. The condition is not contagious.

How does vitiligo look?

The white skin patches seen in vitiligo can be as small as a coin, or large enough to cover a whole limb, and one or more areas can be affected at the same time. Most people with vitiligo have it on their hands, face, or skin folds, however, vitiligo can affect any region of your body, including your genitals, the inside of your mouth, and even the inside of your eyes and auditory system. Hair that’s on affected regions might also become grey from the lack of melanin.

Depending on the pattern of distribution of the patches, doctors classify vitiligo as either focal or generalized:

Vitiligo is seen in 1-2% of the population, and it can affect all races and both genders equally. Nevertheless, the skin lesions are more noticeable in people with darker skin color. The patches usually appear early during one’s lifetime, and almost always before reaching the age of 40.

We are still not really sure why vitiligo happens. We know that melanocytes stop producing melanin, but we do not know why, and it doesn’t seem to be a hereditary problem. Nevertheless, people who have a family history of vitiligo are more likely to have it, suggesting a possible familial link.

People with vitiligo are also likely to have other autoimmune diseases, such as scleroderma, lupus, thyroiditis, psoriasis, alopecia, type 1 diabetes mellitus, and others. This has led to the belief that vitiligo is also an autoimmune disease. This means that your body’s immune system is attacking melanocytes and causing the problem, however, we still don’t know why.

The pathophysiology and mechanism of vitiligo are a little bit complex and not yet clearly understood. We know that melanocytes are destroyed in people with vitiligo, but we don’t know exactly why. One of the most accepted theories is that vitiligo is an autoimmune disease.

The autoimmune theory of vitiligo suggests that vitiligo happens when immune T-cells and B-cells start attacking melanocytes and destroying them. Researchers were able to find activated cytotoxic T-cells in the blood and skin of patients with vitiligo. Antibodies against melanocytes have also been discovered in these patients’ blood, further supporting the autoimmune explanation.

New research has also suggested the role of “memory” T-cells in the recurrence of vitiligo when stopping treatment. Memory T-cells are a form of immune cells that “saves” information related to their targets (in this case, melanocytes) to later activate the immune system against them. These cells were found in the skin lesions in vitiligo patients. The researchers theorized that once we stop treatment, these cells re-activate the immune systems, and cause the vitiligo lesions to show again.

Immune suppression and targeted immune therapy (JAK Inhibitors) aim to target the pathways that lead to the activation of T-cells and B-cells, and hopefully cure vitiligo.

How is vitiligo diagnosed?

A dermatologist can usually diagnose vitiligo by physical examination after obtaining a thorough medical history. They can order blood work to search for other related problems that are usually associated with vitiligo, such as anemia and diabetes. If your doctor is unsure of the diagnosis, they might take a small skin biopsy and send it to the lab for examination. This helps the doctor see if there are any melanocytes present in the diseased skin segment.

What are the treatment options?

Treatment of vitiligo depends on several factors, such as how extensive the patches are, their location and number, and your treatment response. Your doctor might suggest surgical treatment, medical treatment, or a combination of both. The goal of treatment is to achieve a homogeneous skin color.

Medical treatment: this refers to all forms of treatment that do not include surgery, and it includes oral and topical medications, as well as other forms of therapy.

This is usually the last resort in treating vitiligo, and can only be attempted if your vitiligo has been stable and not growing for at least one year. There are several types of vitiligo surgeries:

These future treatments of vitiligo have shown much promise and are expected to be the long-awaited solution for the chronic skin condition:

Vitiligo is not an uncommon skin condition, and it might be both a physical and psychological burden. If you have vitiligo and it’s causing you cosmetic concerns, you can discuss any of the available treatments with a dermatologist.

To search for the best health providers for dermatology in Croatia, Germany, Greece, Italy, Malaysia, Singapore, Slovakia Spain, Thailand, The UAE, the UK, and the US, please use our free search engine.