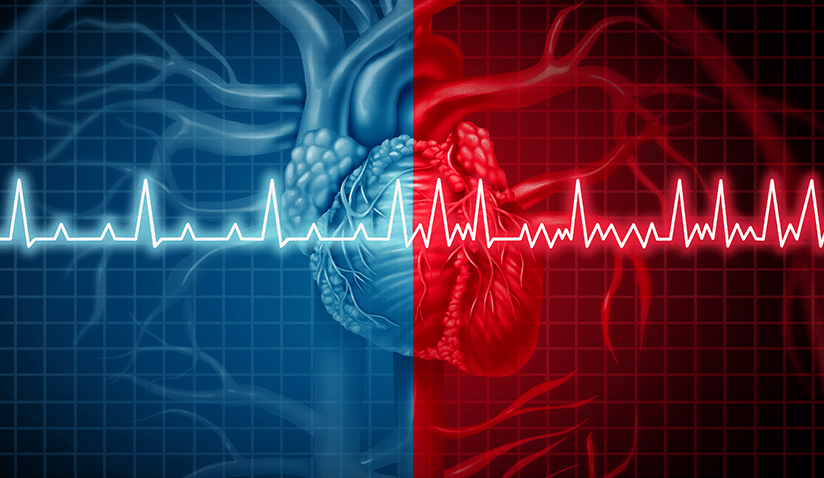 In patients with atrial fibrillation (A-fib), the heart’s upper chambers beat rapidly, disrupting the heart's regular rhythm. A-fib can be asymptomatic, or it can cause fast heartbeats, shortness of breath, and dizziness. According to a retrospective study, the rate of atrial fibrillation (the most prevalent cause of cardiac arrhythmia) has increased by over 30% in the last 20 years. Prevalence is projected to be up to 12 million in the US by 2050 and nearly 18 million in Europe by 2060. A-fib also increases the risk for stroke and other heart problems. Atrial fibrillation patients usually take lifelong anticoagulation medication, which increases the risk of bleeding.

Cardiac ablation uses an intravascular catheter (a long, thin, flexible tube) to ablate abnormal heart tissue providing a definite treatment for atrial fibrillation. Ablation uses minor burns or freezes to scar the inside of the heart. This scarring disrupts the electrical signals that cause irregular heartbeats, thus resulting in a normal cardiac rhythm. Personalized approaches to atrial fibrillation ablation can ensure durable results and prevent the recurrence of atrial fibrillation.

What is Atrial Fibrillation?

The heart comprises 4 chambers; 2 upper chambers (atria) and 2 lower ones (ventricles). A-fib happens when the atria beat irregularly, and their rhythm becomes out of sync with the ventricles. This happens because a group of cardiac cells in the atrium produces irregular electric signals.

Episodes of A-fib may be intermittent – they come and go and are called paroxysmal atrial fibrillations, or they may be persistent. Although atrial fibrillation isn’t a life-threatening condition in itself, it requires proper treatment to prevent stroke and relieve symptoms.

Although atrial fibrillation and atrial flutter are different types of arrhythmia, their treatment is very similar.

What is Cardiac Ablation?

Cardiac ablation is a procedure during which a catheter is introduced intravascularly to ablate faulty heart cells and correct irregular heart rhythms.

Depending on the type of the heart rhythm problem, different types of cardiac ablation can be performed in patients with atrial fibrillation: 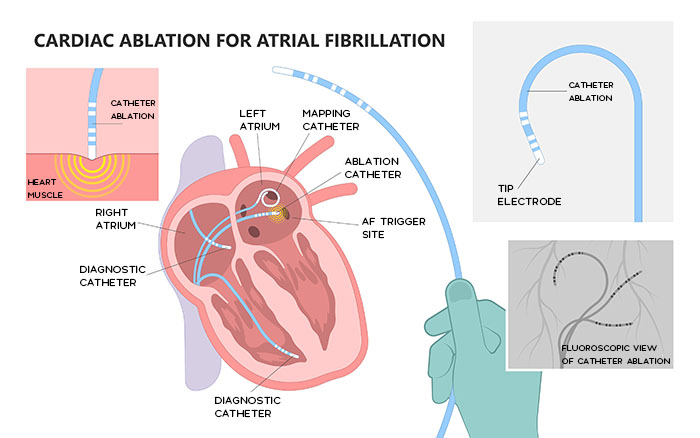 For some patients, A-fib ablation may be the first line of treatment. For other patients, it may be recommended in case heart medications or other atrial fibrillation treatments don’t work.

Candidates for the atrial fibrillation ablation procedure are:

Patients who receive ablation treatment for their atrial fibrillation may no longer need anticoagulant medications - another benefit of this minimally invasive therapy.

How is Ablation for Atrial Fibrillation Done?

Cardiac specialists perform thorough tests before ablation that may include electrocardiograms, echocardiography, blood tests, and cardiac CT or MRI.

Afib ablation usually takes less than 1 hour at leading centers. Afterwards, you will be taken to a recovery room where the medical team will closely monitor you.

You will spend a night in the hospital and can go home the following day.

Very few heart centers in Europe and worldwide offer a personalized approach for atrial fibrillation ablation. With personalization, doctors make careful considerations to optimize each ablation procedure and prevent the recurrence of fibrillation.

This is done by ensuring that the heat energy delivered by the catheter produces enough scar tissue in the atrial tissue - just the right amount necessary, not more or less. As a result, ablation is much more efficient, safer and more durable i.e. recurrences are reduced to the minimum.

To make sure enough lesions are created in the atrial wall, the medical team controls different parameters, such as:

Each one of these parameters are modified and adapted to the left atrial wall thickness at each point. The direct visibility enabled by a CT scan images obtained before the ablation procedure helps guide the intervention.

A highly specialized protocol for AF ablation called “ Ablation-by-LAWT” has been shown to give patients maximum long-lasting results in the safest way possible.

Cardiac ablation treatment offers a permanent treatment for certain heart rhythm problems. It can be very effective in relieving A-fib symptoms. It is also crucial in reducing the risk of worsening heart failure.

Dr. Antonio Berruezo Sánchez is the Director of the Department of Arrhythmias and Research and Innovation of the Teknon Heart Institute at Teknon Medical Center, Barcelona, Spain. He is one of Europe’s top specialists in interventional treatment of cardiac arrhythmia. Additionally, he is acclaimed for his contributions to the prevention and treatment of sudden death, and pacemaker and defibrillator implantation.

The Teknon Heart Institute is super-specialized in: