CAUSES OF FEVER AND RASH IN CHILDREN 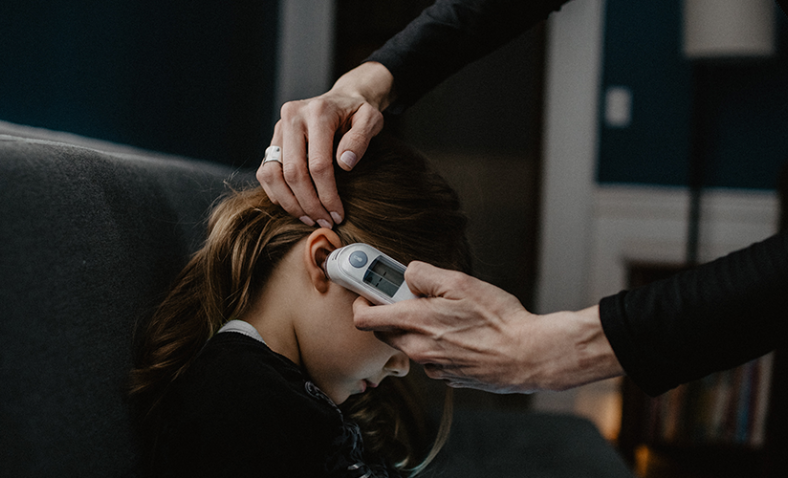 The combination of fever and rash is frequently seen in children. There are several infections causing these symptoms. With the help of vaccines, serious effects of these conditions have been rarely seen. Let’s take a look at the most common causes of a fever and rash.

What can cause fever and rashes?

Measles used to be a common and serious infection, affecting nearly 90% of children during the pre-measles vaccine era. Despite the introduction of the vaccine, minor outbreaks were still seen from 1989-1991 and in 2014. The measles virus is typically transmissible through the air (droplets or aerosols). Children who are infected may pass on the virus to other people from 3 days before up to 6 days after the first day of the rash.

Measles infection starts with a prodrome of symptoms, such as high-grade fever, cough, a runny nose, and red eyes. After about 2-4 days, a rash may appear, starting behind the ears and at the hairline, spreading downwards through the chest and towards the arms and legs. At this point, other symptoms start to decrease or resolve gradually. Cough usually lasts the longest, up to 10 days from the start of symptoms.

Some patients are more at risk of developing measles. These include children less than 5 years old, those who live or stay in crowded areas, those with severe malnutrition or low serum retinol levels, the immunocompromised, and patients with malignancies.

Patients with measles are typically diagnosed based on their clinical history and physical exam findings, as well as a known history of measles cases in the local area. During outbreaks, confirmation of measles may be done through blood tests.

Other uncommon but associated symptoms include ear infections, pneumonia, sinusitis, vomiting, diarrhea, dehydration, febrile seizures, and inflammation of the brain (called encephalitis). Treatment for measles is focused on supportive care measures, such as increased fluid intake, medications for fever, and airway humidification. Vitamin A supplements may also be given. For immunocompromised kids, ribavirin may be given.

Rubella is also known as German measles, or 3-day measles. Like other infections, prior to routine vaccinations, there were rubella epidemics every 6-9 years affecting mostly preschool and school-aged children.

This viral infection is typically mild in children but may be serious if acquired from an infected mother during the first few weeks of pregnancy (called congenital rubella syndrome). Affected children may infect others 5 days before to 6 days after the first day of the rash.

In infants and older children, the initial phase of the infection is marked by low-grade fever, headache, body weakness, lack of appetite, a sore throat, and red eyes (that may be painful). Afterwards, a rash starts to appear at the face and neck, spreading to the torso, arms, and legs. The throat may also have rose-colored sores or reddish, pinpoint spots. The rash may last for up to 3 days; in some cases, no rash develops at all.

In congenital rubella syndrome (CRS), newborns may be deaf, or have cataracts, heart disease, or a low birth weight.

Signs and symptoms of rubella can overlap with other infections. Confirmation of the diagnosis may be done using laboratory tests. This is important in particular for CRS. No specific antimicrobial treatment is needed; medications for fever and pain are typically given. In rare, severe cases, steroids or immunoglobulin may be given, depending on a case-to-case basis.

Rubella may lead to some complications, including a decreased platelet count that translates to pinpoint rashes, nosebleeds, or tea-colored urine. Other rare complications include arthritis and encephalitis.

One less common infection characterized by fever and rash is erythema infectiosum, or fifth disease, caused by the parvovirus B19 virus. This is spread from person to person through respiratory secretions in the air and in blood. In rare cases, it could cross the placenta from the mother to the fetus in the first few weeks of pregnancy.

Before the rash appears, affected kids experience low-grade fever, body weakness, a runny nose, and headache. Afterwards, the face becomes flushed with the typical “slapped-cheek” appearance. The rash is usually smooth, with no bumps, spreading to the trunk, upper arms, and thighs. After a few days, the rash spreads to the rest of the arms and legs, becoming lacy in appearance. Fever goes away, but some children may experience itchiness or see an additional pinpoint-like rash.

The rash can come and go, especially when the skin is exposed to heat, exercise, stress, or even sunlight. This can last for 1 to 3 weeks. The rash may be accompanied by joint pains. This infection is unique in that the rash itself is not contagious to other people.

This is a mild infection that usually resolves on its own. However, children who have chronic hemolytic anemia may have a decreased hemoglobin level when they get infected. For immunocompromised kids, immunoglobulin may be given.

Varicella infection, also known as chickenpox, is one of the most common infections causing fever and rash especially before the 1990s, where the majority of children get infected before they turn 10 years old. Chickenpox can be spread through the fluid inside skin lesions and respiratory secretions. Kids who are infected can be contagious two days before the rash appears until all the skin lesions dry up and become crusted.

At the beginning, a child may have a combination of fever, body weakness, loss of appetite, headache, and abdominal pain. This is followed by a rash that is initially red and smooth at the scalp, face, and trunk. The rash becomes bumpy and filled with clear fluid. As the first batch of rashes crust and dry off, a new set of rashes form, usually at the trunk area. Sometimes, sores may be seen in the mouth. More sets of rashes may form until around 7 days.

Varicella can affect newborns and infants if the mother develops a rash a few days before or after giving birth. In these cases, immunoglobulin or antiviral drugs may be given. On the other hand, congenital varicella syndrome happens in around 2% of babies whose mothers contract varicella between the third and fifth months of gestation. These newborns have skin that looks scarred in a zigzag pattern, and leg or arm deformities or fractures. The brain, eyes and kidneys may also be affected.

Adults who previously had chickenpox can develop a secondary infection years after. This is called shingles. The rash may look like the classic chickenpox but affects only a small area of the skin. Sometimes, there is only pain at a certain area of the skin and no rash.

Chickenpox is diagnosed based on the child’s clinical history and physical examination. However, the diagnosis may be confirmed through blood tests. Antiviral drugs may be given for older children, those with chronic skin or lung problems, those taking steroid medications or salicylate drugs, and people who are constantly exposed to the patient.

Hand, foot and mouth disease (HFMD) is a mild viral infection frequently seen during the summer. It’s characterized by fever, painful mouth or lip sores, and small blisters on the hands, feet, or buttocks. Symptoms can last up to 10 days and are rarely severe. HFMD is diagnosed clinically and is not usually confirmed with laboratory tests. The main goal of treatment is supportive, which includes medicine for fever.

Roseola infantum (simply referred to as roseola) is another mild viral infection affecting kids 2 years old and below. It is characterized by high-grade fever for 3 to 5 days, with decreased appetite, cough, and a runny nose. After the fever breaks, a raised, spotty rash appears on the trunk and spreads towards the arms and neck.

Although roseola is mild in itself, some kids whose fever episodes rise quickly are prone to develop febrile seizures. Treatment for this infection includes fever medications and increased fluid intake.

What to do after being exposed to an infected person

If you’ve been told that you or your child have been exposed to a chickenpox or measles case, take the appropriate steps to prevent the infection from developing or worsening.

If you were exposed to a case of rubella, the measles-mumps-rubella vaccine may be given on a case-to-case basis.

It’s difficult to prevent chickenpox if you have been exposed for the first time, but the varicella vaccine may be given within the next few days. As in measles, those who are immunocompromised, pregnant, or newborns may be given the varicella immunoglobulin after exposure.

How to prevent infection

The best way to prevent infection is to avoid any exposure. If you feel that your child has a transmissible viral infection, keep them at home, in their own room. Ask family or household members to avoid staying close to the child.

If a child is admitted to the hospital with these types of infection, a healthcare provider may choose an isolated room, or make use of special precautions (wearing gloves, masks, or overalls) to protect themselves from catching the infection. Above all, vaccination is the most important method of preventing severe infection.

Fever accompanied by a rash can mean different types of infections. While most aren’t serious or life-threatening, proper care should be given to prevent any serious complications associated with these infections.

About the Author:
Sarah Livelo is a licensed physician with specialty training in Pediatrics. When she isn't seeing patients, she delves into healthcare and medical writing. She is also interested in advancements on nutrition and fitness. She graduated with a medical degree from the De La Salle Health Sciences Institute in Cavite, Philippines and had further medical training in Makati Medical Center for three years.