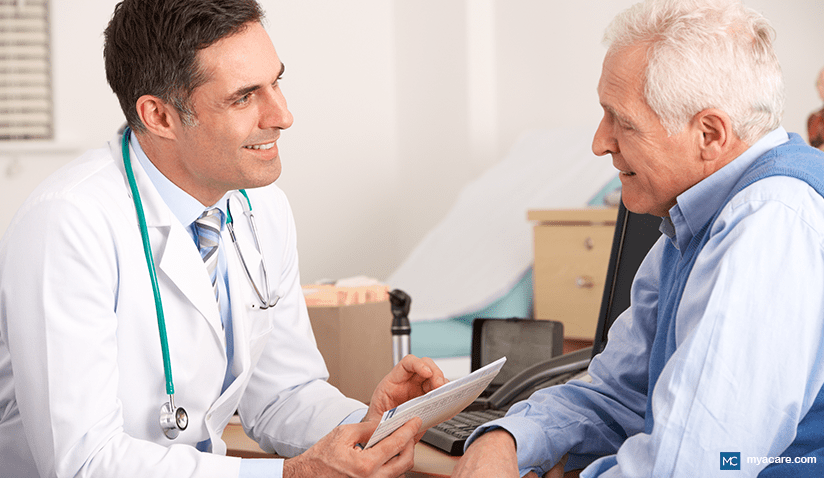 The excretory system is crucial for the survival of an organism, ensuring that all functions of the body are carried out effectively and efficiently. This system is primarily involved in the removal of waste products from the body. Without it, the body would become highly toxic and quickly succumb to a lethal disposition.

The following overview discusses the excretory system with a main emphasis on the urinary system, which is arguably the most important aspect of excretion.

Excretion is the disposal of waste products and forms a vital part of all biological cycles at the cellular level.

Cells take in nutrients and use them to produce functional products in response to cellular signals. Signals consist of a wide array of compounds, including hormones, microbial by-products and basic nutrients such as minerals, vitamins, amino acids and other peptides. Additionally nerve impulses and environmental cues such as temperature and pH affect certain cell cultures in ways that generate signals in response. Signaling compounds instruct the cell what products to produce from the building blocks it receives. They interact either directly or indirectly (via chain chemical reactions) with the cell’s DNA.

In this context, the excretory system can technically comprise every organ and system in the body. Thus the term elimination is used to describe cellular excretion – the waste products are typically eliminated from the cell and moved along to an organ that can process them.

Components of the Excretory System

The main organs that process cellular waste products for excretion (complete removal from the body) are the kidneys, the digestive tract (mainly the colon and gut microbiome), the lungs and the skin. The bladder carries out the final excretion of urinary waste products that are refined in the kidneys, with both organs forming the urinary system.

The urinary system is perceived as being the most important part of the excretory system as a whole and is discussed below. The other systems involved in excretion are also reviewed. 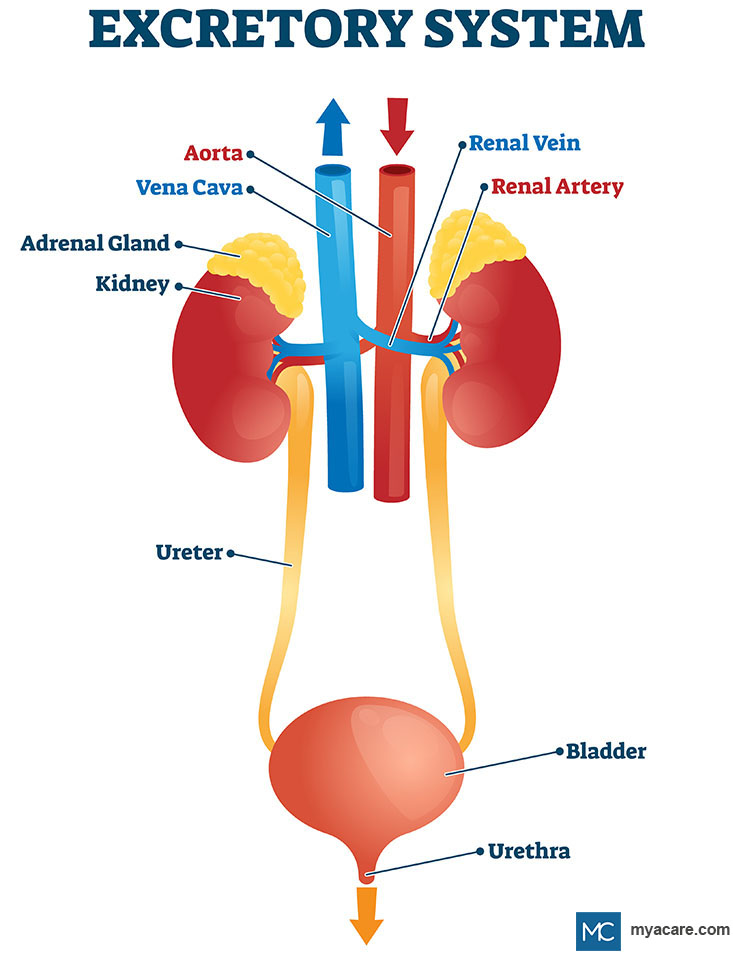 The kidneys take the majority of cellular waste from the body, transported to them via the bloodstream. They then produce urine and send it to the bladder for excretion.

Blood supply to the kidneys stems directly off of the main vein and artery that descend from the heart; reflective of the importance of these vital organs. The kidneys require optimal oxygenation for energy manufacture in order to maintain optimal homeostasis in the body.

The kidneys are regulated by hormones, nerve impulses as well as its own internal regulatory mechanisms.

The kidneys, like all bodily organs, are home to neuro-endocrine cells that send feedback to the brain, as well as those that receive it and alter kidney function.

The hypothalamus in the brain receives a wide variety of signals relevant to kidney function by monitoring nerve impulses and blood activity. In response to these stimuli, it sends signals to the pituitary which then in turn releases hormones that the kidney responds to by modulating its functions.

Nerve impulses are also generated that cause the smooth muscles in the kidneys to relax or contract, depending on the circulatory requirements of these excretory organs.

In the absence of neuro-endocrine involvement, the kidneys are still able to function and appear to have their own form of auto-regulation.

Auto-regulation is a homeostatic mechanism that is usually referred to in the context of the cardiovascular system, in which blood vessels relax or contract as a result of increased or decreased blood pressure respectively. When applied to the kidneys, auto-regulation of kidney blood vessels alters the rate at which it eliminates and recycles waste products, thereby regulating kidney function.

The two main functions of the renal system are elimination and osmoregulation, which each simultaneously serve a variety of other functions when fulfilled by the kidneys[1].

A large portion of bodily waste is derived from the liver. The liver is involved in many processes pertaining to bio-transformation, in which nutrients or cellular metabolites are transformed into further useful products and waste products. Urea is synthesized primarily in the liver before it makes its way via the bloodstream to the kidneys and to a lesser extent, the skin.

Urea contains many hormonal by-products and proteins as well as lots of nitrogen, calcium and phosphorus. The kidneys filter through liver-derived urea before producing the final substance that is excreted during urination. Kidney-derived urea, or urine, also contains excess mineral ions from the blood stream at large, including all electrolytes (calcium, magnesium, sodium, potassium and chlorine) as well as any other blood minerals we may have in excess. Ammonia, uric acid, creatinine, pigments and inorganic salt also form part of urine.

The main active component of the kidney would be the nephrons, which are responsible for recycling useful waste products and eliminating unnecessary ones. Nephrons consist of intricate renal tubes which are designed to recycle metabolites in the blood and excrete the rest. Anything that can be recycled is typically sent back to the liver while the rest combines with water to produce urine. This is achieved through selective membrane permeability. Mineralocorticoids and certain other substances alter the permeability of the membranes inside nephrons.[3]

Different portions of each nephron are involved in different aspects of elimination. Nephrons are anatomically divided into the following sections[4]:

The kidneys are responsible for generating a small pool of hormones that govern osmosis, blood pressure, electrolyte balance and more. These hormones include:

The kidneys regulate the balance of fluids in the body through being in control of mineral re-absorption and excretion. [5]

Mineral ions govern the movement of fluids in and out of cells, being the master coordinators of osmosis in the body. Thus, disturbances in the balance of cellular (internal) and blood (external) mineral concentrations determines how much water the kidneys withhold to maintain osmoregularity. Sodium and potassium are the main regulators of water retention. Water levels are also involved in conserving blood volume, a factor that is intimately linked with cardiovascular function and blood pressure.

Osmoregulation is further governed by a group of hormones produced at various sites of the body. These hormones include:

The bladder is an organ that takes urine from the kidneys via the ureter, storing it until urination is possible. The thick membrane of the bladder comprises of three layers of muscle tissue known as the detrusor muscle, which facilitates its functions. It also contains two sphincters that sit underneath the organ, connecting the urethra to the bladder.

When the bladder is not in use, the detrusor muscle remains relaxed while the sphincters remain contracted. This ensures that urine remains inside the bladder, storing it until excretion takes place. Storage of urine is particularly important during the night when we’re asleep in order to promote better rest and rejuvenation.

Bladder volume and pressure are controlled through the nervous system via the actions of neuro-endocrine cells, neurons and nerve impulses. When pressure in the bladder rises due to urinary retention, nerves connected to the bladder relay sensory information to the brain via the pelvic girdle and spinal cord. Through this feedback, we become aware that we need to urinate. Other nerve fibers respond to other signals, such as chemical irritation, similarly alerting the brain which then acts to mediate bladder function appropriately.

Originally, the bladder was thought of merely as a storage and excretion organ. However in recent years, evidence has surfaced that reveals that the cells of the bladder are able to absorb water from stored urine[10], thus increasing its concentration of waste products and conserving bodily water. In animal studies, it is shown that the bladder also reabsorbs nitrogen and creatinine[11].

Other Organ Systems Involved in Excretion

The following systems also play a role in the excretory system, however the role is minor compared with the processing capacity of the urinary system.

The digestive system is involved in the excretion of waste products in the form of defecation. Digestive waste, better known as feces, comprises of excess hormones, minerals, dietary metabolites, undigested food, microbial waste and other by-products the body does not need.

Through the process of digestion, water and nutrients are absorbed from digesting food that moves through the digestive tract. The tract is broken down into the stomach, the colon, the small intestine, the large intestine and the rectum. Contractions along the muscles of the digestive tract are responsible for the movement of food and waste, known as peristalsis.

When waste products reach the end of the tract and enter the rectum, expansion of the rectal walls informs the nervous system and alerts the organism that it needs to defecate. If the urge is denied for longer than a minute or two, the feces move back into the digestive tract where more water is extracted from them. Prolonged fecal retention causes constipation and eventually contributes to systemic toxicity.[12]

The lungs mostly serve to help us to breathe. The act of exhaling is also an act of gaseous excretion.

The lungs have a very large surface area in order to oxygenate enough blood to sustain the energy requirements of the body. The surface area also helps to expel all gaseous waste products from the blood, with the exception of microbial ones from the gut which are released via flatulence.

The main waste products that the lungs excrete consist of carbon dioxide and water. This requires charged hydrogen ions and bicarbonate ions to execute.[13]

Skin and the Integumentary System

The skin’s main function is to protect the internal environment from external threats[14]. Its secondary functions lend toward temperature regulation and excretion via sweating.

The main aim of sweat is to cool the body down[15], however, and it only plays a minor role in the excretory system. Mineral salts, especially sodium, and water are the main components of sweat, with a small portion consisting of proteins, hormone metabolites (think pheromones), vitamins, viral by-products and a few other toxic substances[16]. Sweat glands also excrete a fraction of liver-derived urea in the form of sweat.