IS LYME DISEASE AN AUTOIMMUNE DISEASE? 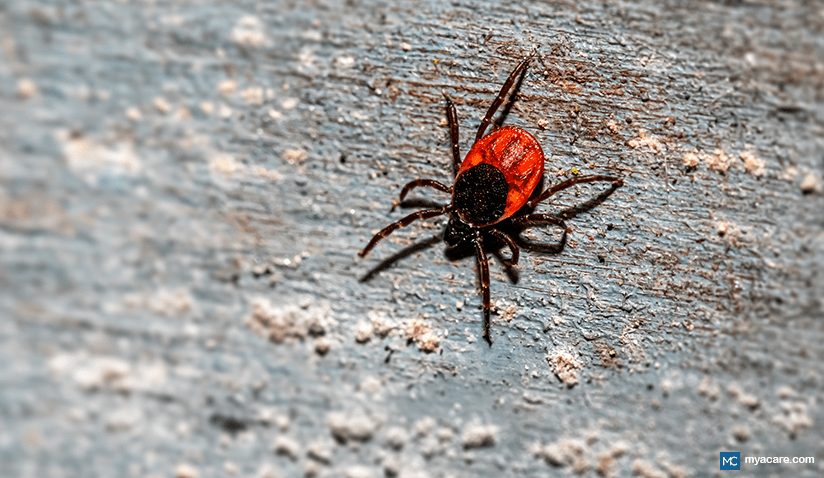 What is Lyme disease?

Lyme disease is the most commonly occurring tick-borne infection in the United States. It's caused by bacteria transmitted to humans by a tick bite. The bacterium is spiral-shaped and called Borrelia burgdorferi (1).

Lyme disease can be successfully resolved with antibiotics, especially if it's detected early (2). If left untreated, it can spread to other parts of your body and cause serious problems. However, many people with Lyme disease don't remember being bitten by a tick, and others may not have noticed the tick because its bite is painless.

Early symptoms of Lyme disease typically present as a  circular red skin rash around a tick bite called Erythema migrans(3). This red, circular, or oval-shaped rash often expands over a period of days and can reach up to 12 inches (30 centimeters) across. Sometimes the center clears as it enlarges resulting in a bull's-eye appearance. It's typically not itchy or painful but may feel warm to the touch. Some people develop this rash at more than one place on their bodies. The rash can appear up to a month after you've been infected, but it usually occurs within one to two weeks and can last for several weeks.

Not everyone with Lyme disease gets the rash. You may also have flu-like symptoms in the first few weeks of infection, such as tiredness, muscle pain, headaches, high temperature (fever), chills, swollen lymph nodes, and joint pain (4).

A few people with Lyme disease develop more serious symptoms weeks, months, or even years later. These include(3):

Disease signs and symptoms can appear quickly or gradually over time, and they are different for everyone.

Left untreated, Lyme disease may spread to your heart and nervous system.

What is an autoimmune disease?

The immune system comprises millions of cells that work together to protect the body from foreign invaders like viruses and bacteria. A healthy immune system doesn't attack its own tissues, but in people with autoimmune diseases, this system malfunctions (5). Many different cell and protein components make up the immune system, and problems with any one of them could cause malfunction.

Autoimmune diseases can affect many parts of the body. The most common areas affected are the thyroid gland, joints, muscles, connective tissues (such as lupus), and blood vessels (such as vasculitis). Some autoimmune diseases target only one organ. Type 1 diabetes damages the pancreas, for example. Others cause damage all over the body.

The causes of autoimmune diseases are unknown. Doctors and researchers think that some combination of genes, environmental triggers, and hormonal factors may play a role in who gets them and why. With some conditions, having another disease caused by bacteria or virus or even taking certain medicines can trigger an autoimmune response in your body.

Is Lyme disease an autoimmune disease?

Lyme disease has been found to be an autoimmune disease. This finding is supported by the fact that many people who have Lyme disease have antibodies in their blood against their own tissue, which is a sign of autoimmunity. In addition, some areas of the brain may be damaged due to inflammation caused by Lyme disease. Inflammation is also seen in other neurological (nerve and brain) disorders that are thought to be autoimmune diseases; for instance, multiple sclerosis (MS) and Guillain-Barre syndrome (GBS)(6).

This immune response occurs as a result of antibodies produced by the body's own immune system attacking healthy cells and tissues. Antibodies are proteins that help protect us against infections, but in autoimmune diseases, these same protective agents attack healthy tissues by mistake. In addition to producing antibodies, our immune system can also produce other substances involved in inflammation (e.g., cytokines). These substances contribute to inflammation and tissue damage.

When a person becomes infected with Lyme disease, the immune system is stimulated to produce antibodies to fight off the infection. In most cases, these antibodies do their part and eliminate the infection. However, in a small percentage of cases, the antibodies created by the immune system end up attacking parts of the body that resemble Borrelia, causing harm to healthy tissue(7). This is because the Lyme bacteria infect and hide inside your body's cells. The body then recognizes these cells as not belonging to you or as "foreign" and attacks them. This is similar to what happens in other autoimmune diseases such as lupus, rheumatoid arthritis, multiple sclerosis, and type 1 diabetes.

Is Lyme not an autoimmune disease?

Lyme disease is said to be an autoimmune disorder, but this is not necessarily true. This is because it is a systemic bacterial infection. The reason why Lyme disease is considered an autoimmune disorder is because the body's immune system recognizes the cell that the tick-borne bacteria infects and hides in as foreign and attacks it, which can cause damage to healthy tissue(8). A previously healthy cell infected by the bacterium and attacked by the immune system doesn’t necessarily indicate an autoimmune response since the body is targeting an infected cell.

The immune system's response to Lyme disease also causes some symptoms that might be confused with those of autoimmune disorders as they are similar (8). These symptoms include joint pain and fatigue.

However, there is a key difference between how the immune system responds to Lyme disease and how it responds to other autoimmune disorders—in most autoimmune diseases, the immune system attacks healthy cells for no reason. Additionally, in most autoimmune diseases, the antibodies that attack the healthy cells remain in the bloodstream long after the infection or illness has disappeared. In Lyme disease, however, these antibodies are only present when a person is infected with Borrelia burgdorferi (bacteria that causes Lyme disease).

The scientific and medical communities have a lot to learn about Lyme disease. As a result, treatment is often inconsistent and misinformed. Whether or not it is an autoimmune disease is yet to be fully proven. Lyme disease is also difficult to diagnose and can produce chronic health issues. However, there is hope, as current research is helping doctors understand and treat this condition better.

If bitten by a tick and showing signs or symptoms of Lyme disease — particularly if living in an area known for Lyme disease or have recently traveled to one — consult your doctor. Early diagnosis and treatment are important to prevent more serious complications.