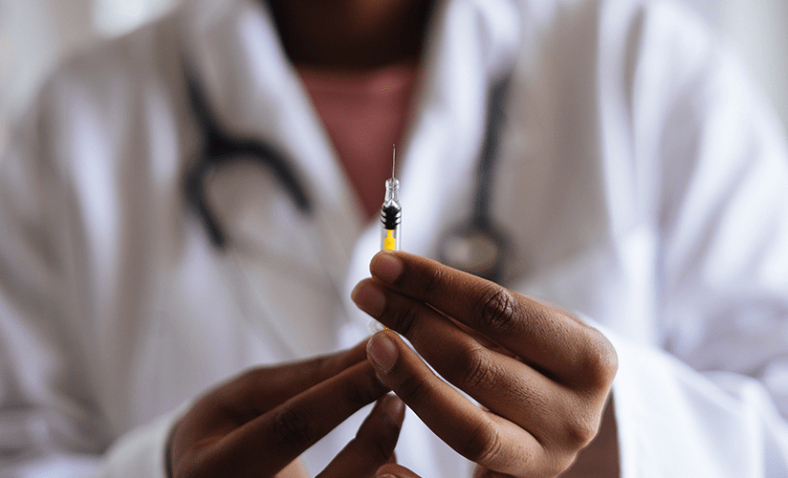 Lyme disease is caused by bacteria that spread to humans through tick bites. If left untreated, the illness can spread and cause serious complications affecting the joints, the heart, or the nervous system.

The need for vaccination against Lyme disease is steadily increasing as the disease is becoming widespread. According to a recent analysis, Lyme disease diagnosis in the U.S. increased by 375% in rural areas and 65% in urban areas from 2007 to 2021.

In December 2022, Pfizer announced the beginning of a Phase III clinical trial to confirm the efficacy and safety of a new vaccine that could protect children and adults against Lyme disease. The Lyme vaccine, VLA15, was developed by Valneva in collaboration with Pfizer.

Read on to learn more about the tick-borne disease, its symptoms, and the first vaccine in the past two decades that can help prevent it.

What Is Lyme Disease?

In humans, these bacteria cause an infection that can spread to the joints, heart, and nervous system if left untreated.

Lyme disease bacteria are not present in all ticks.Ticks that can carry Borrelia bacteria are:

There is no evidence that Lyme disease is contagious – it cannot be transmitted from one person to another.

The 3 Stages Of Lyme Disease

The symptoms of Lyme disease vary from person to person depending on the following:

A red, ring-like rash at the site of a recent tick bite is one of the first indicators of Lyme disease. It may appear several days after infection and last several weeks. The rash might also disappear and return several weeks later. On the other hand, some people do not get any rash at all.

During the earlier stages of Lyme disease, patients may also experience flu-like symptoms, such as:

During the late stage of Lyme disease, patients may develop the following symptoms:

How Is Lyme Disease Treated?

The standard treatment for Lyme disease in the earliest stages is usually antibiotics given as pills or by IV for 10-14 days. Treatment may take longer, depending on symptoms.

After three to four weeks of antibiotic therapy, the majority of cases of Lyme disease are curable.

However, some patients may experience persistent symptoms, such as musculoskeletal pain and cognitive dysfunction, for over six months after undergoing Lyme disease treatment. This is also known as ”Post-Treatment Lyme Disease Syndrome” (PTLDS).

People can not develop immunity against Lyme disease after they have had it – even if you had Lyme disease, you can still get it again. So far, there is no vaccine available to prevent this disease.

Back in 1998, the FDA approved a recombinant Lyme vaccine called LYMErix. However, only three years later, LYMErix was withdrawn from the market because it was less than 80% effective, and there were concerns about its side effects.

How Does The New Lyme Disease Vaccine Work?

Pfizer and Valneva’s vaccine contains OspA protein, one of the most dominant surface proteins expressed by the Borrelia Burgdorferi bacterium when present in a tick. This outer surface protein allows the bacterium to leave the tick and enter the human body.

After receiving the VLA15 vaccine, the patient’s body creates antibodies against the OpsA surface protein. If vaccinated patients become bitten by an infected tick, their antibodies can block the OpsA protein and prevent the bacteria from infecting their bodies.

According to the drug makers, the vaccine requires three doses and covers six Borrelia Burgdorferi bacterium serotypes prevalent in North America and Europe.

In 2018, data from a Phase I study showed that VLA15 demonstrated strong immunogenicity and safety.

The study enrolled 179 healthy adults from Europe and the U.S. who were not infected with Borrelia Burgdorferi previously. The patients received three shots of the vaccine one month apart.

All treated patients developed antibodies against the OspA surface protein. Moreover, there were very few severe VLA15 side effects in all treatment groups and no associated safety concerns.

In 2020, Pfizer announced their collaboration with Valneva to co-develop and commercialize the VLA15 Lyme Disease Vaccine.

In 2021, data from the phase II study showed that VLA15 elicited a strong immune response in adults (18-65 years old) with acceptable safety and tolerability profiles.

In February 2022, Pfizer and Valneva reported positive data from the Phase 2 trial for their Lyme disease vaccine candidate. The vaccine was both safe and effective in adults and children.

The study included individuals between the ages of 5 and 11, 12 and 17, and 18 and 65. Patients who received three doses of the vaccine were more protected against Lyme disease than those who received only two doses.

On August 8th, 2022, Valneva and Pfizer initiated a large Phase III Study of their VLA15 Lyme vaccine. The study is done on around 6,000 children and adults, five years and older, from over 50 regions in Europe and the U.S. where Lyme disease is most frequently found, including Finland, Germany, the Netherlands, Poland, and Sweden. All participants will receive three doses of either the VLA15 vaccine or a saline placebo.

What is Next For Pfizer and Valneva’s Lyme Disease Vaccine?

In 2025, Pfizer may submit a marketing authorization application (MAA) to the European Medicines Agency (EMA) and a biologics license application (BLA) to the U.S. FDA, depending on the outcomes of the Phase III trial. After that, the new vaccine for Lyme disease may become available for people across the United States and Europe.

If the trial succeeds, we will be one step closer to having the first human vaccine against this tick-borne disease in 20 years.

To search for the best Neurology Healthcare Providers in Croatia, Germany, India, Malaysia, Spain, Thailand, Turkey, the UAE, UK and the USA, please use the Mya Care search engine.