WHAT IS OBSESSIVE COMPULSIVE DISORDER (OCD)? 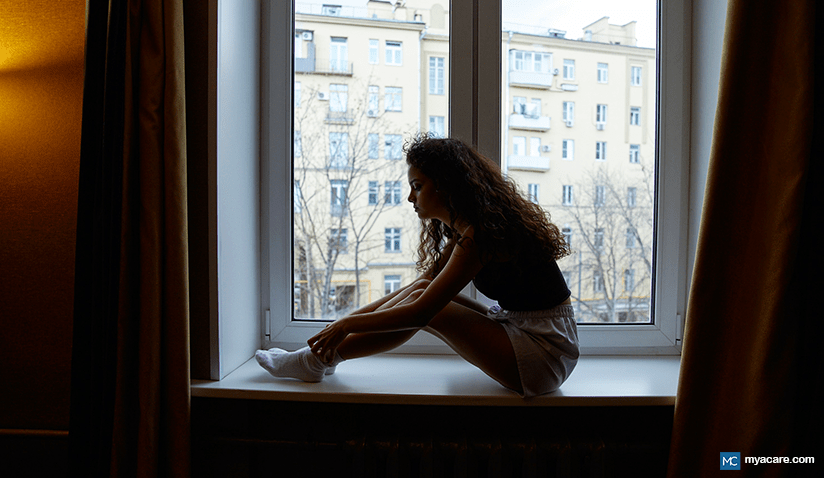 Obsessive-compulsive disorder (OCD) is defined as a type of anxiety disorder in which persons have unwanted and repetitive thoughts, feelings, ideas, sensations (obsessions), or actions that make them feel compelled to act (1). These obsessions can also be identified as compulsions (1). Often the person carries out the behaviors to get rid of the obsessive thoughts, but this only provides temporary relief. Not performing obsessive rituals can cause greater anxiety.

Obsessive-compulsive disorder ranges from mild to severe, but if it is severe and untreated, it can interfere with a person's ability to function at work, school, or even lead a comfortable life at home.

Obsessive-compulsive disorder affects as much as 1% of the population and occurs across all ages and cultures (2). The onset of OCD is usually gradual, but the condition worsens with time. OCD is often associated with other conditions such as depression, an eating disorder, or body dysmorphic disorder.

How is OCD diagnosed?

It is best to consult a psychiatrist, psychologist, or other mental health expert experienced in diagnosing and treating OCD once it is suspected that someone has it.

The diagnosis of OCD begins with a detailed medical history and physical examination. In addition to a full psychological history and mental status, an evaluation will also be done. The mental health professional will perform a clinical interview to assess whether symptoms of OCD are present (2). The interview is followed by diagnostic tests that help evaluate how much the symptoms are affecting the individual's life.

The mental health professional will ask about things such as:

In some cases, the individual might be asked to record his or her thoughts in a diary for several days or weeks to provide more information about the nature of the obsessions and compulsions.

What are the symptoms of OCD?

Symptoms of obsessive-compulsive disorder include having thoughts and fears (obsessions) that lead you to perform repetitive behaviors (compulsions). Obsessions and compulsions create significant distress and interfere with daily tasks. Ignoring or stopping your obsessions may only increase distress and anxiety. Ultimately, a person with OCD feels driven to perform compulsive behaviors. Avoiding situations that trigger obsessions may help.

The symptoms of this disorder can change over time. In some cases, what starts out as an obsession can shift into a compulsion, and vice versa, or both obsession and compulsion. Symptoms of OCD may also change during different phases of life - for example, during times of stress or illness.

Obsessions are repeated, anxiety-inducing ideas, desires, or mental images. These thoughts may intrude when a person is trying to think of or do other things. A person will often try to get rid of the obsession by doing a compulsion (3). Common symptoms include (3):

Compulsions are recurrent acts that a person with OCD feels compelled to perform in response to an obsessive thought. To get rid of obsessive thoughts, the person often engages in the actions, although this only provides temporary relief. Obsessive rituals can generate a lot of anxiety if they aren't followed (3). Some common examples of compulsions include(3): 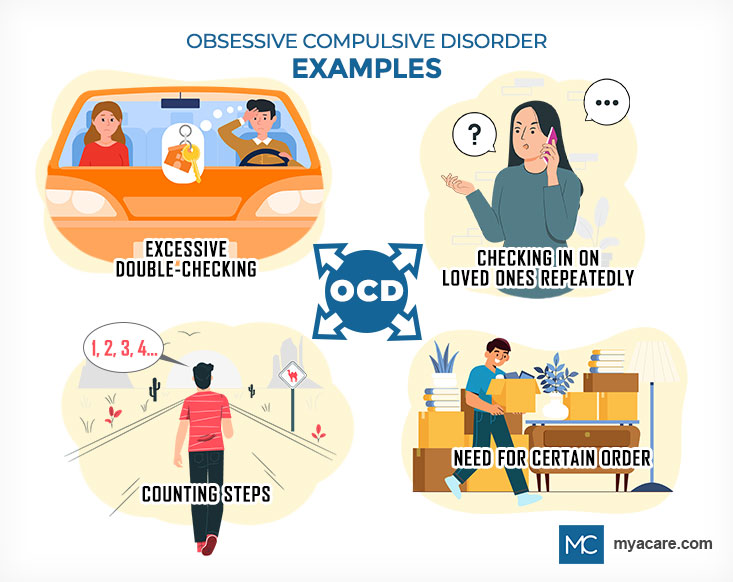 What are the causes of OCD?

OCD can develop at any age and for many different reasons.

Obsessive-compulsive disorder has no definite origin, but most researchers believe it is caused by a mix of factors such as genetics, environment, and life experiences. For example, family studies have shown that there is an increased risk for OCD in first-degree relatives of people with the condition compared to the general population.

While studies show that children with an absent or neglectful parent are more likely to develop OCD, there is no evidence that a child's environment or experiences can cause it (5). The condition runs in families and often appears in some members of the same family - but it's not inherited.

Obsessive-compulsive disorder can be linked to certain regions in the brain (4). This suggests that OCD may result from problems in communication between different brain regions. OCD can often begin during childhood, adolescence, or early adulthood. It occurs in men and women.

A person can develop OCD for just about any reason, from extreme anxiety to depression. Many of those with OCD have other mental illnesses such as depression, anxiety, or schizophrenia.

How to treat OCD

OCD is a chronic illness and, in many cases, a lifelong challenge. Although, with the right tools and support, one can take control of the symptoms and live a happier, fuller life.

Medication and cognitive behavioral therapy (CBT) are used in combination to treat OCD. CBT teaches you how to manage obsessions and compulsions through specific techniques like exposure and response prevention (ERP) therapy. ERP exposes you to feared situations or objects while teaching you skills to resist compulsive behaviors (3).

There are also several apps available to help you manage OCD symptoms. These apps provide self-guided therapies and resources that can help supplement traditional treatments.

If one experiences OCD symptoms that affect the quality of life, one should seek help, as they don't go away on their own. Although OCD cannot be cured, it is treatable with medication, psychotherapy, or a combination of the two. With treatment, most people with OCD are able to get substantial relief from their symptoms. The earlier the patient seeks treatment, the quicker they can receive help, improve their quality of life and learn how to live with this disorder effectively and efficiently.

To search for the best Psychiatry doctors worldwide, please use the Mya Care search engine.