WORRIED ABOUT HAIR LOSS AND THE SIDE EFFECTS OF PRODUCTS LIKE ROGAINE? LEARN MORE HERE. 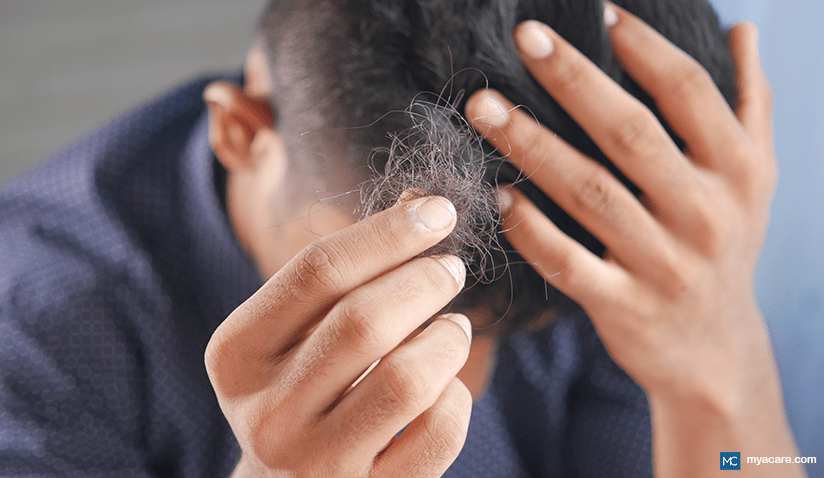 Hair loss is a universal cause of concern. While it affects men and women differently, the incidence of pattern baldness is less common in women, with half of the population over 35 experiencing it compared to two-thirds of men. Underlining the sheer magnitude of their concern, a survey in the UK revealed that balding topped the list of men’s fears of aging, even surpassing impotence. In recent times, the fear of balding has hit a younger segment, with a 2020 survey of 32000 Americans revealing that 59% of men and 57% of women aged 18 to 24 years agree that balding terrifies them.

Alopecia – the medical term for hair loss – has many possible causes, however, the hereditary kind (Androgenetic Alopecia AKA Pattern Baldness) accounts for 95% of cases. The cause of this type of hair loss is linked to increased levels of the male hormones testosterone and dihydrotestosterone (DHT), causing pattern baldness in men and hair thinning and hairline recession in women. While genetics play a strong part, oral contraceptives, thyroid disease, pregnancy, and polycystic ovary syndrome are also attributed to androgenic alopecia. Today, multiple factors, including poor diet, pollution, stress, lack of sleep, smoking, and unhealthy lifestyles, contribute to the growing incidence of hair loss and balding even among the younger populace. Over the years, this concern has spawned a multi-billion-dollar industry on course to grow to USD 14.2 billion by 2028.

This article focuses on the most widely used medical treatment for Alopecia – Minoxidil. Better known worldwide by one of its prominent trade names, Rogaine, Minoxidil is the generic version discovered in 1950 with 100 plus brands available in the market today.

With the increasing access to approved, over-the-counter medications for hair loss, it is advisable to understand their origins, how they work, major and minor side effects, other available options, and more.

How was Minoxidil discovered?

Did you know that Minoxidil was initially developed in 1950 to cure ulcers and later used in 1979 to treat severe hypertension?

Minoxidil is a potent vasodilator i.e. a medication that opens blood vessels to enable easier blood flow. It is available in two forms – as a tablet and a topical formulation. In its initial phase, ‘Loniten’ as it was called, was prescribed selectively for the treatment of severely high blood pressure due to its serious side effects. Incidentally, it was observed that 20% of patients under the drug developed excessive hair growth. This unexpected side effect led to a discussion on using Minoxidil for treating hair loss. Following years of further experimentation and development, in 1988 it was approved by the FDA for treating baldness in men. In 1998, a 5% formulation of the drug was FDA approved for over-the-counter sale, followed by a 5% aerosol foam variant in 2006. A 2% formulation for women was approved in 1992. Today, together with Finasteride, it is one of only two FDA-approved medications for the treatment of pattern baldness.

How does Minoxidil work?

To understand the effects of Minoxidil, it is important to know how it works.

Hair growth happens in four stages - Anagen, Catagen, Telogen, and Exogen. In the Anagen phase, the cells in the root of your hair are at their active growth phase resulting in new hair formation. In this stage, hair typically grows around a half-inch per month. On average, this phase extends over 3 to 5 years growing to full length. The Catagen phase follows, signalling the end of active hair growth. In this stage, at any given time, around 3% of all hairs stop receiving blood supply and access to the cells that produce new hair. This phase lasts about ten days. The Telogen phase ensues with 10-15% of hairs rooted to their follicles but not growing. The Telogen phase usually extends over three months. In the final stage, strands of hair detach from their follicles and fall over the course of 2 to 5 months. Exogen cycles to Anagen and the process continues - hair grows over a few years, rests for a few months, falls, and regrows. 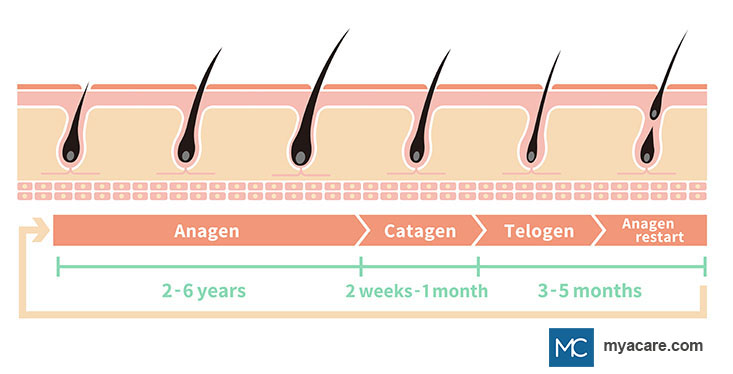 While it is a popular treatment discovered over half a century ago, the precise process behind minoxidil helping hair growth is still unraveling.

As a vasodilator, Minoxidil causes blood vessels around hair follicles to dilate. This action leads to the enlargement of hair follicles and appears to prolong the growth (anagen) phase, enabling more hair to breach the surface. An increase in hair length and diameter is also observed with Minoxidil. Another effect of the drug on the hair growth cycle is that it shortens the telogen phase. In simple terms, resting hair follicles (in telogen) enter the anagen phase of growth and activity under the drug’s effect. However, the shrinkage of the telogen phase can cause telogen effluvium - hair coming out in handfuls due to the stress of being pushed prematurely into an inactive state.

It takes around eight weeks for the initial effects of treatment to occur. The full effects take about four months.

Minoxidil seemingly also affects the potassium channels of vascular smooth muscles (type of smooth muscle that forms the majority of the wall of blood vessels) and hair follicles, possibly leading to the following effects:

What are the side effects of Minoxidil?

While Minoxidil and Rogaine are vastly popular products extensively and safely utilized the world over, there is still a rare chance of severe side effects. Here are the most common side effects:

The relief is that these side effects may be temporary till your body adjusts to the medication. Side effects usually wear off if usage is discontinued.

Lasting or severe side effects, while rare, do occur. These are:

Having originated as a treatment for severe hypertension, the drug’s effect on people with normal cardiac function can be concerning. As a vasodilator, Minoxidil can increase your heart rate and cause new or aggravating chest pain. Medication to reduce blood pressure is usually additionally prescribed to mitigate this. Furthermore, people with pre-existing cardiac conditions are advised against using minoxidil as it can cause chest pains and possibly heart failure.

Since some adverse effects were observed during the trials, pregnant women are advised against using Minoxidil as rare cases of congenital disabilities have been reported. It is also not recommended for women who are breastfeeding since the medication is transmitted through breast milk.

Additionally, those with a hypersensitivity to the medication or any of its components are advised to refrain from using it.

Those who have or had kidney or liver disease are advised to consult their doctor before using Minoxidil.

Since the formulation for women differs, it is advisable for them to not use the men’s product.

The use of Minoxidil is also not indicated in the following scenarios:

Minoxidil can cause the skin to be more sensitive to sunlight, so exposure to direct sunlight is best avoided. If sun exposure is unavoidable, protective clothing, glasses, and sunscreen lotion are recommended.

While hair loss is not life-threatening, it has a profound impact on a person’s self-image. When it first occurs, hair loss can trigger impulsive decisions to regain lost hair. Medical products available over the counter such as Rogaine can seem tempting. However, it is important to carefully consider the side effects and know when to consult a physician since it is not recommended for everyone. Furthermore, evaluating your options such as other medications (Finasteride, Spironolactone, Dutasteride), hair transplant surgery, or laser therapy can also help.