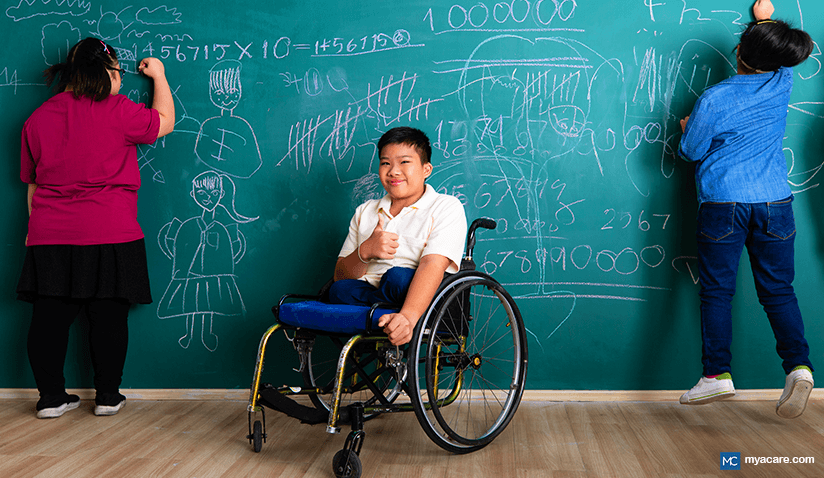 Caudal regression syndrome is a disorder that affects the development of the lower (caudal) half of the body. It is a rare congenital disorder where the genitourinary system, the gastrointestinal tract, the lower back, and limbs may all be affected. The remaining spinal cord function is inversely correlated with the severity of the morphologic derangement. Ghanim Al-Muftah, the ambassador of FIFA World Cup 2022 is a Qatari YouTuber and philanthropist who has Caudal regression syndrome. Ghanim is an inspiration to all affected by this condition. Instead of allowing it  to hinder his life, Ghanim has learnt to adapt to a more or less regular lifestyle, carrying on everyday activities including swimming and hiking and even participating in extreme sports.

What Is Caudal Regression Syndrome?

Caudal Regression Syndrome, also known as sacral syndrome, or caudal dysplasia, is a rare congenital disorder affecting 1 to 2.5 per 100,000 newborns. It is also called sacral agenesis due to the sacrum's incomplete or non-existent development, a triangle-shaped bone that connects the backbone to the pelvis.

People with caudal regression syndrome may have twisted intestines, blockages in the anus, and other digestive system irregularities. Treatment is symptomatic and may involve surgeries.

The condition affects how the lower part of a baby's body grows and develops in the womb, including the following:

The lower spine's vertebrae (the bones that make up the spine) are frequently distorted or absent in people with this disorder, and the corresponding spinal cord segments are also irregular or missing.

The vertebrae around the spinal cord may not completely close in the affected person. They may have tufts of hair at the base of their spine or a fluid-filled sac on their back that is covered by skin and may or may not contain part of the spinal cord.

The most severe type of caudal regression syndrome, according to some sources in the medical literature, is a condition referred to as sirenomelia. But recently, many researchers have claimed that sirenomelia is a different but related disorder.

Who Are At Risk For Developing Caudal Regression Syndrome?

Infants born to mothers with diabetes (which is thought to affect 1 in 350 newborns) are at risk for developing caudal regression syndrome. It is believed that caudal regression syndrome could manifest in a developing fetus due to elevated blood sugar levels and other metabolic issues linked to diabetes. If the mother's diabetes is not adequately controlled, the risks to the baby increase further.

It is possible that additional genetic and environmental factors are at play because this condition also affects newborns born to people without diabetes. The condition equally affects both males and females.

Caudal regression syndrome is a complicated condition with multiple potential causes. In a newborn, this condition can be brought on by a variety of genetic and environmental factors, such as:

Caudal regression syndrome is thought to be caused by a genetic mutation. This condition can be brought on by genetic changes in your body that occur during conception (when the egg and sperm meet), specifically, genetic mutations in the HLXB9 or the VANGL1 gene.

The condition can also occasionally affect newborns without a family history of the disorder. This is known as a sporadic occurrence. Research is still ongoing to find out more about the potential causes of this condition and how it affects newborns.

The baby's development while inside the mother's womb can be impacted by changes in the parent's blood glucose levels and metabolism. However, the development of this complex disorder also affects infants of non-diabetic mothers, prompting researchers to look for additional risk factors.

Abnormal Artery In The Abdomen

It is believed that reduced blood flow to these regions prevents them from developing normally and causes caudal regression syndrome.

Embryonic Abnormalities In The Mesoderm

According to some researchers, caudal regression syndrome is brought on by a disruption of fetal development around the 28th day of pregnancy. The mesoderm, or the middle layer of embryonic tissue, is thought to be affected by developmental issues.  The mesoderm comprises a collection of cells in charge of constructing the bones and organs of the fetus's body.

The normal formation of certain parts of the skeleton, digestive system, and genitourinary system is therefore hampered by disruption of normal mesoderm development.

Depending upon the severity of the diagnosis, the symptoms of caudal regression syndrome range from mild to severe and are limited to the lower part of the child's body. The child's appearance may not change significantly in mild cases. However, in extreme cases, there might be observable differences in the area of the hip and leg.

The symptoms of caudal regression syndrome include:

Abnormalities In The Skeletal System

The syndrome can affect the development of the child's bones, such as:

Malformations In The Renal System

The development and function of a child's renal system can be affected by caudal regression syndrome symptoms, including:

Issues In The Reproductive Organs

Symptoms that affect the reproductive organs include:

Problems In Other Internal Organs

Various other symptoms affecting digestion and the heart, such as:

How Is Caudal Regression Syndrome Diagnosed?

The first signs of caudal regression syndrome typically appear between the fourth and seventh weeks of pregnancy. However, most of the time, the condition can be identified by the end of the first trimester.

The doctor may use an ultrasound to look for signs of gestational diabetes if the mother has a history of diabetes or acquired it while pregnant. Otherwise, any fetal abnormalities will be checked for during routine ultrasound exams.

If the doctor suspects caudal regression syndrome, they might run an MRI after 22 weeks of pregnancy. This allows them to visualize the lower body more precisely.

After birth, an MRI may also be used to confirm the diagnosis. In addition, other tests like X-rays can be used to examine the effects of the condition on the newborn's bones.

Patients with caudal regression syndrome are frequently treated by an interdisciplinary team comprising the following specialists:

Each child with caudal regression syndrome will require treatment based on their symptoms. The child may need multiple operations to treat their symptoms as they grow. Depending on the child's symptoms, they may require treatment with medications or surgery as soon as possible after birth or in the first few months of life, including:

Can You Prevent Caudal Regression Syndrome?

What Can I Anticipate If My Child Has Caudal Regression Syndrome?

Caudal regression syndrome is an incurable, lifelong condition. Your child needs a team of specialists to treat and manage the condition throughout their lives because the symptoms affect several different body parts.

Surgery may be required as early as infancy to correct any growth abnormalities that may have occurred during your baby's development. After birth, your child may remain in the hospital for a few weeks to ensure their health.

Your medical team will collaborate with you and your child's caregivers to help you learn more about your child's condition, how you can support your child's healthy development, and what symptoms you should keep an eye on at home.

What Is The Prognosis?

Your child might go on to lead an active and healthy life in minor cases. Over time, they might be able to support their body weight and assist in movement with the aid of special footwear, braces, or prosthetics.

When To Schedule An Appointment With The Doctor?

Visit the doctor with your child if:

If your child experiences any alarming symptoms, such as irregular heartbeat, difficulty breathing, or other symptoms, take them to the emergency room.

Caudal regression syndrome is a rare congenital disability that affects the caudal or lower portion of the spine. Some have minor defects and have no outward sign of the condition. In contrast, for others, substantial areas of the spine are absent, affecting the ability to walk and control the bowel and bladder.

Depending on the severity of the conditions and the parts affected, surgeries can help treat specific abnormalities. There is, however, no cure, and complications may affect the child's life expectancy. More details about what to anticipate following childbirth and future options can be discussed with your doctor.