CALORIC RESTRICTION AND LONGEVITY: HOW LESS EQUALS MORE OVER A LIFETIME 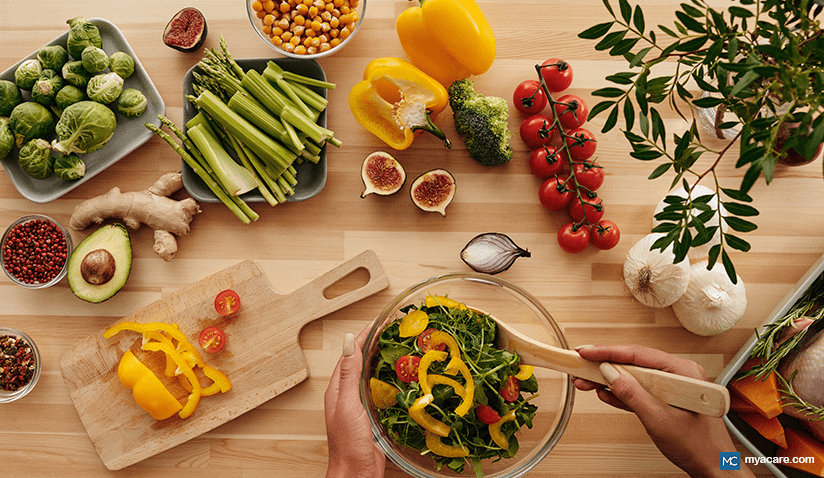 Caloric restriction has been recently touted as one of the biggest anti-aging secrets behind living for over 100 years. Reflective of the wisdom that ‘less is more’, the long-term benefits of consuming fewer calories appear to speak for themselves.

In this article, current knowledge on caloric restriction is discussed in the context of aging, health, and well-being. Its effects on metabolism are briefly discussed, followed by benefits, types, and safety, as well as tips on best practices for practicing caloric restriction.

What is Caloric Restriction?

Caloric restriction refers to the practice of lowering dietary energy intake below prior energy requirements in the absence of malnutrition. The goal of caloric restriction is to lower the resting metabolic rate. Over time, it begins to shift the metabolism to a lower energy state, meaning that less energy is needed to sustain body functions during rest.

Metabolic Rate: The Secret Behind the Benefits of Caloric Restriction

Metabolism, Rate of Living and Lifespan. According to the ‘rate of living’ theory, every organism has a finite metabolic potential – in other words, a limited amount of energy that can be produced and expended during its lifespan.[1] The concept of caloric restriction came into being after observing that the rate at which the metabolic potential is expended (metabolic rate) is indirectly proportional to lifespan. Theoretically, the less energy the body expends to carry out its functions, the longer the lifespan of the organism. Resting metabolic rate (RMR) is used to assess the rate at which one’s metabolic potential is expended and is also a reflection of mitochondrial efficiency.

Oxidative Stress, Aging, and Metabolic Efficiency. The rate of living theory is connected to many other theories of aging pertaining to mitochondrial oxidative stress. 1-3% of the oxygen consumed to produce energy is believed to be converted into oxygen-free radical species that are capable of damaging cellular structures when not balanced with cellular antioxidants. The resting metabolic rate can increase the level of oxidation that occurs as well as the degree of free radicals produced as a result. Over time and with aging, more energy is expended, more damage to cells can accumulate, and regulatory antioxidant mechanisms become less functional. Healthy, aged individuals are known to have a lower resting metabolic rate, which is a possible compensation for diminished cellular functions after a lifetime of oxidative stress accumulation.[5]

Disease and Metabolic Rate. Secondary aging as a result of disease or life stressors impacts cellular function in a similar way to that of ordinary aging. Initially, they serve to increase resting metabolic rate, oxidative stress levels, and free radical production. In the later (terminal) stages of the disease, the resting metabolic rate slows down and is comparable to that of advanced aging.[6] This is usually related to mass reduction (i.e., muscle wasting and bone density loss).

Factors Influencing RMR. Resting metabolic rate can be increased by many factors, including:

Reduced Calorie Intake Positively Redistributes Energy Expenditure. Caloric restriction promotes both a reduction in and a redistribution of energy expenditure. While overall energy requirements eventually reduce, less energy is also spent on digestion due to a lower intake of calories, which frees up more energy for physical activity.

Caloric restriction has been studied in the context of historical food restriction, long-term trials, and animal studies, all of which have shown promising effects with respect to aging and metabolic health.

Caloric Restriction can be achieved in several different ways:

Which Method is Best?

There does not seem to be a caloric restriction method that poses more benefit over another method. Thus, the best method depends on the needs of the individual.

The Difference Appears Minimal Between Time-Restricted Eating and Caloric Restriction. In a small-scale trial on 139 participants, the differences between caloric restriction achieved either through dietary calorie control or time-restricted eating were minimal. Participants who limited consumption between 8 am and 4 pm lost 8kg on average over the course of a year, whereas those who limited their calorie intake lost 6.3kg on average in the same time period. All other health outcomes were similarly beneficial.[28] It should be noted that restricting food intake to daylight hours has the added benefit of timing food intake with the metabolism and that if the time restriction was shifted into the evening, the results are likely to be completely different (as evidenced by the dietary outcomes of night shift workers). When the timing of food is accounted for, the differences in the above results are negligible.

Short-Term Fasting and Caloric Restriction Benefits Proved Similar. Fasting on alternate days (zero calories for 1-2 days; normal consumption every other day) proved to promote the same benefit as a continuous caloric restriction in young to middle-aged adults.[29] However, alternate day fasting created a much greater negative energy balance (47% vs 28% on the caloric restriction diet), which implies a steeper utilization of stored energy reserves. Despite this difference, there was no compensation in eating habits once normal consumption resumed in alternate day fasting.

Intermittent Fasting or Time-Restricted Eating Can Be Easier to Implement. Despite these findings, precise caloric restriction is often more difficult to implement safely than time-restricted eating or intermittent fasting. Most people are not prepared to measure their nutrient intake or count their calories, and the process is prone to miscalculation.

Long-Term Consistency Promotes Better Metabolic Stability. While the results are comparable across studies for different types of caloric restriction diets, consistency is vital for reaping the long-term benefits. In trials that lowered metabolic rate, it has been observed that participants often compensated behaviorally by engaging in less physical activity. After 1-2 years, the metabolism eventually stabilized, and participants were engaging in their usual activity levels while consuming fewer calories. Intermittent fasting and time-restricted eating are prone to similar metabolic fluctuations that can affect physical activity levels until sufficient time has passed for the metabolism to fully adjust.

Is Caloric Restriction Safe? Side Effects and Contraindications

Caloric restriction is generally regarded as safe if carried out in the absence of malnutrition. Caloric restriction ought to be undertaken in the context of a nutrient-dense diet containing adequate protein, fats, carbs, and micronutrients to sustain health and well-being.

What is Caloric Over-Restriction? It is not certain at what point restricting calories would lead to starvation, provided the diet still contained adequate nutrition. Human studies have only truly looked at caloric restriction diets that limit between 10% and <40% of caloric intake, which have all shown considerable long-term benefits. Animal studies suggest that caloric restriction over 40% demands nutrient deprivation and gives rise to ill health effects.

Other Safety Considerations. Physical activity levels should also be considered with regard to caloric restriction, as well as current calorie intake. A healthy diet plan is often low in calories, and may not require a further restriction of calories. Furthermore, regular moderate-intensity exercise also contributes to reducing calories, improving one’s energy balance, and enhancing mitochondrial energy production. Individuals who engage in frequent physical activity and who consume a nutrient-dense diet likely already meet the baseline requirements of caloric restriction as a practice and are likely already receiving the benefit.

Side Effects. Without adequate nutrition, caloric restriction is not conducive to health and tends to promote starvation in the long run. Chronic over-restriction of calories and long-term starvation can result in the following side effects:

Contraindications. Caloric restriction is not a recommended practice for any individuals with the following conditions:

How to Practice Caloric Restriction Safely

The concept of caloric restriction can be applied in any of the above ways (intermittent fasting, time-restricted eating, or calorie counting and reduction). The conventional approach demands counting calories and limiting their intake without compromising adequate nutrition.

Conventional caloric restriction begins with either using a calorie calculator, or visiting a dietician or a nutritionist that can help to define one’s current average caloric intake. This is based on age, height, weight, and physical activity levels. The average recommended caloric consumption for men is around 2500 per day and 2000 per day for women.[30] Caloric restriction diets that show the best benefit typically opt for a 10-<40% reduction, which would equate to roughly 1550-2250 calories for men per day and 1250-1800 calories per day for women.

4 tips that may be useful when initiating conventional caloric restriction:

Non-essential plant-based nutrients have been found to be responsible for the health-promoting benefits of whole foods.[31] Many of their antioxidant effects were also shown to be comparable to various components of caloric restriction.[32]

They are present throughout the diet, mainly in fruits, vegetables, legumes, herbs, spices, whole grains, nuts, and seeds. All antioxidant phytochemicals are typically consumed in tiny amounts, averaging a few hundred micrograms to several milligrams per day. While their quantities are minimal (and even less in processed foods), their collective dietary presence and benefit have been shown through epidemiological studies linked with optimal health, longevity, inflammation control, and a reduced risk of acquiring disease.[33]

In animal and other studies, most of these plant-based nutrients failed to extend lifespan in short-term trials alone. However, their effects appear to enhance the longevity-promotion effects of caloric restriction, making them complementary.[34] Diets rich in these compounds are also typical of nutrient-dense caloric restriction diets, suggesting that they may be key to restricting energy intake.

The complementary benefits of some of the better-studied phytochemicals are highlighted below:

Exercise Consistency Better Enhances Caloric Restriction Benefit. A handful of studies show that the resting metabolic rate is slightly elevated after acute exercise due to changes in oxygen uptake. These effects do not appear to be carried forward with consistent, long-term exercise, wherein resting metabolic rate remains largely unaffected after engaging in physical activity.[42] Other reviews mirror these results, revealing that regular exercise serves to negate the consequences of increasing free radical production[43], which can be problematic in the context of acute or exhaustive exercise. [44]

While there is no ultimate cure for aging, it would seem that extending our mortality may be as simple as processing less on a daily basis. Restricting calories is able to lower the metabolic rate and significantly enhance energy production, with noticeable long-term benefits on health and the quality of aging. Unprocessed, plant-based whole foods and physical activity offer complementary benefits to that of caloric restriction through promoting optimal energy metabolism.