THE POWERS OF O2 AND HYPERBARIC OXYGEN THERAPY: BENEFITS, SAFETY, AND MORE 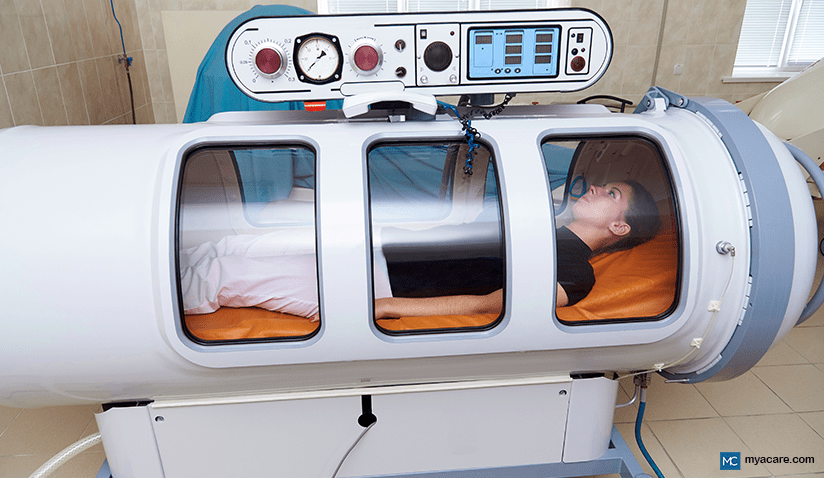 Over the past two centuries, studies into the characteristics of oxygen have revealed that it has two distinct roles: one as a catalyst for combustion and the other as the chief regulator of metabolism. Without it, life on the planet would not have evolved into what it is today.

Hyperbaric oxygen therapy increases oxygen levels in all tissues, which has been documented to improve many aspects of health and well-being in both humans and animals. On the flip side, oxygen administration has been associated with severe forms of toxicity, even leading to fatal outcomes in uncontrolled settings.

This article covers the advantages and potential negative consequences of hyperbaric oxygen therapy on health. The discussion also explores oxygen deficits and overload, approved uses and contraindications, as well as tips for improving body oxygenation.

The Biological Importance of Oxygen

Oxygen is vital to all life on the planet. Despite this fact, its role is widely underestimated by doctors and nutritionists.[1] [2] The importance of oxygen is highlighted when looking at its essential functions in the body.

Oxygenation. Every time we inhale, a mixture of gases perfuse our lungs, including hydrogen, nitrogen and oxygen. Oxygen makes up approximately 21% of the air we breathe. As it enters the alveoli of the lungs, it diffuses across membranes into the bloodstream following a natural pressure gradient. The alveoli are required to be permanently moist in order to facilitate this process. Once oxygen enters the bloodstream, it rapidly binds to hemoglobin in blood cells, after which it is transported to every tissue in the body. Some oxygen remains dissolved in the bloodstream (unbound to hemoglobin), helping to promote better saturation of tissues. [1]

Oxygen’s Role in Respiration and Metabolism. As an electron acceptor, it plays a key role in energy production by guiding the electron supply chain inside the folded membranes of the mitochondria. Oxygen achieves this by enabling the production of ATP from both glucose and fats, allowing for the movement of electrons, aiding the chemical reduction of several important substrates, and facilitating both Krebb’s cycle and urea production.

Hypoxia, Inflammation, and Disease. Faulty oxygenation can promote a series of metabolic deficits pertaining to low oxygen status, referred to as hypoxia. It has been observed that hypoxia results in cellular stress that typically increases glucose and/or fat utilization in order to meet energy requirements. This naturally results in heightened inflammation levels, which, if left unchecked, can be detrimental to health.

What Constitutes Hypoxia? All tissues in the body have unique mitochondria as well as oxygen and energy requirements. In general, the optimal oxygenation of tissues occurs roughly at the same concentrations as that of air (21%). Studies also highlight that intermittent low oxygen (hypoxic) exposures of between 9-16% show potential health benefits, while those lower than 9% typically promote pathology.[2]

The therapy consists of a pressurized oxygen chamber in which the patient usually lies inside. Once sealed, the chamber fills with filtered air, filling up with a higher concentration of oxygen than other gases. HBOT chambers typically administer very high oxygen concentrations at a pressure of between 2-3 atms for 1 to 2 hours at a time. Some guidelines suggest taking air breaks every 20-30 mins to reduce the risk of complications. Most studies quote a concentration of up to 100%, however, some HBOT providers offer lesser amounts at higher pressure values.

After the pressure builds in the chamber and the patient has equalized, the remainder of the treatment does not feel any different from being outside the tank. The patient is often free to entertain themselves in the chamber until the time is up.

There are three main principles that underscore the efficacy of HBOT:

Hyperoxia-Hypoxia Paradox. Both hyperoxemia[3] and hypoxia appear to trigger the same cellular systems, giving rise to similar acute effects (e.g., free radical formation) yet different long-term effects, which ultimately pertain to overall oxygen status. As hyperoxia gives rise to inflammation, exposures need to be as short as possible to achieve the desired effects.

HBOT as a Complementary Treatment Option

Hyperbaric oxygen therapy was initially used to treat decompression sickness or “the Bends”. It is now recognized that hypoxia is a component of numerous states of disease which can be effectively treated with HBOT. Currently, it is approved for treating roughly 15 medical conditions and has been proven to be a successful therapy option for many more health conditions, including diabetic foot and carbon monoxide poisoning.

The following medical applications for HBOT have been acknowledged by the Undersea and Hyperbaric Medical Society[20]:

*In the absence of contraindications (see safety below).

Preliminary research indicates that HBOT may be useful in the treatment of several other health conditions and diseases, including stroke, traumatic brain injury, severe fungal infections, autoimmune disorders including psoriasis, and arthritis, fibromyalgia and other conditions symptomatic of widespread chronic pain, various forms of cancer, and COVID-19.[21]

Despite showing promising results, more testing needs to be done to ensure safety.

HBOT is generally regarded as safe at the pressures utilized for treatment. Most HBOT protocols saturate body tissues with up to 40% oxygen, using 100% oxygen or highly oxygenated air at a pressure of between 2-3 atms. Tissue oxygen saturation should not exceed 42% to avoid toxicity.

The higher the pressure inside the HBOT tank, the more saturated body tissues will become with oxygen. Hence, pressure over 3 atms is associated with oxygen toxicity. HBOT at pressures of up to 6 atms is occasionally used as an emergency protocol to treat gas embolisms.

HBOT does not usually cause any side effects. Common side effects include feeling sleepy, light-headed, or breaking out in a sweat. In some cases, patients may experience symptoms during treatment that are specific to their condition.

Rare complications include seizures and arrhythmias, however, these usually occur in patients with conditions that are contraindicated.

HBOT is contraindicated in the following cases:

Antioxidants facilitate optimal oxygenation by enhancing mitochondrial utilization of oxygen and helping to regulate the production of ROS, which can lead to excess inflammation if left unchecked. Moreover, antioxidants have been shown to protect against hypoxia, as discussed below.

Body-Derived Antioxidants. Under severely hypoxic conditions, experimental evidence reveals that endogenous (body-derived) antioxidants are capable of binding to hemoglobin and being transported directly to tissues that are in dire need of oxygen. In this way, it was shown that hemoglobin Superoxide Dismutase protected pancreatic beta cells subject to extremely low levels of oxygen (6, 3, and 1%) after transplantation.[29]

Levels of endogenous antioxidants can be increased through several means:

Diet-Derived Antioxidants. Preliminary evidence reveals that various plant-based antioxidants are able to increase levels of cellular antioxidants in hypoxic cells, thereby reducing inflammation and improving their chances of survival. This specifically applied to any antioxidant capable of activating the NRF2 pathway in the cell, including sulforaphane.

Aerobic exercise that increases the heart rate and improves cardiorespiratory fitness is an effective way to boost blood oxygen levels and the oxygenation of tissues. This applies both in the short and long term, with the most benefit being gained through consistent effort over time.

Improved Oxygen Uptake and Delivery. As the heart rate increases, we breathe more deeply and take in more oxygen, forcing the blood to become more saturated than at rest. Simultaneously, it increases the rate at which our blood flows, allowing more blood to circulate through the lungs and collect oxygen. Regular exercise promotes red blood cell production and turnover, as well as the renewal of faulty blood cells. This helps to increase and maintain optimal tissue oxygenation in the long run.

Moderation is Key. Acute exercise shows a cutoff point for optimal oxygen uptake, with prolonged activity often showing diminished uptake. This is possibly related to a sharp rise in body temperature and/or the generation of excess inflammation in response to overly intensive exercise. Both of these factors can lead to reduced oxygenation. It is important not to overexert oneself and to rehydrate after intensive exercise.

Practicing how to breathe through the use of deep breathing techniques can enhance oxygen uptake and promote better overall respiratory function.

Respiratory Muscle Control. These exercises typically emphasize taking in large breaths, holding them, and breathing out in a slow controlled manner. This works the diaphragm and supports all the muscles required for breathing.

There are various types of breathing exercises that can increase body oxygen levels, including pranayama yoga and CPAP breathing.

If blood pH decreases and becomes more acidic, it can promote less binding of oxygen.[30] Reduced blood oxygen as a result of increased bodily acidity typically only reaches a critical point during the end stage of severe chronic diseases such as seen in lung or kidney failure. Chronic acidosis may result in or be a symptom of various health conditions, including osteoporosis, kidney stones, diabetes, and other metabolic diseases. Smokers, those on various pharmaceuticals, and highly allergic individuals are also at an increased risk for bodily acidosis.

Lung and Kidney Support. The lungs and kidneys are two of the greatest regulators of bodily acidity. The lungs dispose of carbon dioxide (which increases blood acidity) and the kidneys regulate levels of alkalizing electrolytes such as bicarbonate while eliminating other acidic substances. [31] Therefore, protecting the lungs and kidneys can contribute toward maintaining optimal tissue oxygenation.

Factors that increase bodily acidity through affecting kidney function include:

Both high and low temperatures can reduce tissue oxygenation in the following ways:

High Temperatures from chronic infections and fevers have been associated with the onset of cellular hypoxia and the progression of metabolic diseases. In children running high fevers, reducing the fever proved to increase blood oxygen saturation between 1.45-1.57% on average.[32]

Temperature Regulation Enhances O2 Utilization. Taking a shower in cold water after exercise has been shown to improve tissue oxygenation[34] as well as mitochondrial production and regeneration (known as biogenesis)[35]. It may additionally enhance mitochondrial oxygen utilization through two oxygen-related pathways.[36]

In light of all the above points, keeping one’s temperature constant and within a healthy range helps to preserve optimal tissue oxygenation.

Oxygen is critical to cellular energy production, mitochondrial function and many other cellular processes revolving around tissue growth, and regeneration. Hyperbaric oxygen therapy saturates body tissues with oxygen through increasing environmental pressure, and its propensity to dissolve in body fluids. Benefits associated with its use include stress reduction, enhanced wound repair, pain relief and the regulation of immune processes. Most of its approved applications revolve around treating wounds or poisoning, however,research indicates that it may be pertinent as a complementary therapy in the context of pain-related disorders, diabetes, and autoimmune diseases. Therapy may be enhanced by improving one’s overall oxygen status.